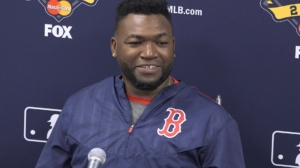 Sometime during the 4th inning of the 2016 mid-summer classic, while the cracker jacks were popping and the peanuts cracking, the 42,000 plus fans in attendance at Petco Park had all eyes on the field, while David Ortiz, otherwise knows as Big Papi, held court in an auxiliary press room for 15 minutes, showing off his larger than life personality. He smiled, laughed, told stories, horsed around with reporters, whom he knew on a first name basis, laughed some more, and explained how he doesn’t see himself managing in the near future, because all of the managers he knows have gray hair.

Major League Baseball has rolled out the red carpet, and spent an entire season embracing Big Papi on his farewell tour of big league stadiums. And tonight was no different.

After Papi’s second at bat, in which he walked, he was taken out of the game for a pinch runner, and was given a standing ovation from the fans. It was one of the more memorable moments of the All-Star game, in an underwhelming game. But, not nearly as spectacular as it could have been.

Rather than being in that interview room, and telling reporters that he won’t have any regrets about hanging up the cleats after this, his final season, many pondered, why wasn’t he still on the field, getting a few more cracks at sending one deep. This is a game that is supposed to matter now. And rather then exit after two at bats to a standing ovation, the ultimate, spectacular David Ortiz farewell, who always does things bigger, would have been him trotting around the bases in usual Big Papi fashion, after belting one deep in the right field seats, and then pointing up to sky after crossing home.

Watch Our Video with David Ortiz from the 2016 All Star Game in San Diego:

About the Author: Mike Steinberg